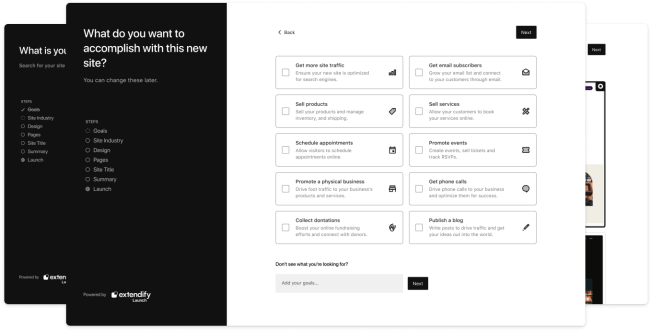 Greeting from San Diego and WordCamp US Contributor Day! The last four days were filled with catching up with friends, conversations about new cool developments, themes and contributing to WordPress.

But the time didn’t stay still, and there is so much more happening around WordPress Planetand WordPress.

This is a video heavy edition with recordings from WordCamp US talks, as well as new workshops available on WordPress TV.

Conversations at WordCamp US

Artur Grabowski gave me a demo of Launch, a new product by Extendify. The team works with hosting companies to install a most modern onboarding experience for their WordPress customers to reduce the very high churn rate of 50% customers leaving for SaaS CMSs. Launch provides the “most fool-proof solution to onboard WordPress customers with just a few clicks” the new site owner sees a personalized site with vertical-specific copy and images. It integrates seamless with WordPress instance, is built with native WordPress components and does not use 3rd party page builders.

Aaron Edwards demonstrated the early beta version of Iamjinn’s newest product: a plugin to bring the magic of AI Image generation to WordPress. The prompt for testing the image generation API was “Young female assembling blocks in the right corner of a car repair shop” The first set was generated was in the style of Mexican painter Frida Kahlo, the second set in the style of Spanish painter Salvador Dalí and the third in Comic Book Style.

Last week, I spent Sunday morning in Midjourney’s Discord server and created last week’s featured image with a similar prompt. So, I was thrilled when I met Aaron Edwards, and he was willing to give me a tour and access to the early Beta. If you are interested, you can request beta access, too.

In her post TT3 default theme: Announcing style variation selections, Channing Ritter wrote: “These variations were selected in an effort to feature the most drastically different set of variations possible — so in many ways, we were looking at what would work best as a collection versus selecting our favorite standalone submissions.”

You can see the variations in below video.

In her article, WordPress Announces 10 Style Variation Selections for Twenty Twenty-Three Theme, Sarah Gooding covers the unveiling of the style variations submitted by community contributors to be bundles with the new default theme.

If you’d like to get a head start on what changes will come with WordPress 6.1 you have a few options.

Jonathan Pantani announced that the release team will hold a 6.1 Product Walk-Through on September 13 at 16:00 UTC (12:00 EDT). “WordPress 6.1 release squad members will join #core contributors from #core and the broader WordPress community to conduct an informal preview of the major features in the upcoming release.”

September 19th, 2022, starting at 6pm MDT / 8 pm EDT, I will be discussion WordPress 6.1 new features in a virtual meeting with the members of WordPress Meetup group in Boulder, CO. You can join us via Meetup

Carlo Daniele did a deep dive via his blog post for Kinsta: What’s New in WordPress 6.1: JPEG to WebP Conversion, Fluid Typography, Improved Template System, and Much More!

You can watch the recording of Rich Tabor‘s talk at WordCamp US about A New Era of WordPress Themes is Here: Block Themes from the live stream on YouTube. Tabor also tweeted the essence of the talks in this Twitter Thread including links to mentioned references and plugins.

Michelle Schlup walked us through the evolution of themes in WordPress, the advent of Design Systems, the Atomic design of Block themes and the concerns and consideration of a change in how you create Themes in WordPress. Her talk at WordCamp US is available on YouTube (via the livestream). Her slidedeck is available on Speakerdeck: The Future of Themes: Designing for the Block Editor and Beyond

“Keeping up with Gutenberg – Index 2022”
A chronological list of the WordPress Make Blog posts from various teams involved in WordPress Planetdevelopment: Design, Theme Review Team, Core Editor, Core JS, Core CSS, Test and Meta team from Jan. 2021 on. Updated by yours truly. The index 2020 is here

Building Blocks and Tools for the Block editor.

In this video: Styling your WordPress Blocks, Jonathan Bossenger guides new block developers through the process of styling the Edit component and the save function of a newly created WordPress block.

Nick Diego invited WordCamp US attendees: Let’s build a Custom Block in 15 Minutes. You need to watch the YouTube recording from the live stream to find out if 15 min are enough.

Ryan Welcher presented on Extending WordPress with Slotfills and you can watch it via YouTube. He also published his code on GitHub: WordPress Slotfill System.

Need a plugin .zip from Gutenberg’s master branch?
WordPress PlanetTimes provides daily build for testing and review.
Have you been using it? Hit reply and let me know.

In this video on WordPress TV, Sarah Snow reveals: How Do They Do That? The (Very) Basics of Block Theme Development. Have you ever wondered how block themes are developed from an idea, through a Figma file, into WordPress, and beyond? If so, this recording of social learning space event is for you. Snow walked intermediate WordPress users through the high-level process many theme developers take to design a theme from start to finish.

Evan Mullins‘ talk at WordCamp US was titled: FSE For the Win. Mullins wrote in the session description: “Personal branding and online presence are made easier with full site editing! Do you have a personal site? Is it attractive? Is it current? No more excuses, full site editing makes it too easy not to put your best website out for the world to see. Put up a photo with a few links, a resume, recent projects, a collection of your favorite social media, a simple link tree, etc. We’ll go through some fun examples and see some blocks and block patterns to quickly get up and running.” See the YouTube livestream.

Creating a new header with blocks was the topic of Wes Theron‘s workshop on meetup. The recording is now available on WordPress TV. Explore how to build a header from scratch using a block theme! Gain a more profound understanding of how blocks are nested to create a header, and how to replace a header template part.

Darren Either created a recording of how he created the first iteration of the Woo Swag Store homepage using FSE, Basti Theme, and various WooCommerce store editing features. The Basti theme by Anariel Design is available in the WooCommerce Marketplace, documented here

Anders Norén published his fourth block theme called Bjork, and introduced it in his blog post. He wrote: “Björk has a very classic blog theme structure, with a sidebar navigation to the left and the content to the right. You’ve seen hundreds of these WordPress themes before – I’ve released like six of them myself – but with the advent of block themes, everything old is new again. There aren’t many block themes with this structure on the theme directory yet.”

Sarah Gooding reviewed it in this article for the WPTavern: Anders Norén Releases Björk, a Free WordPress Block Theme for Blogs and Personal Websites

Marko Segota explains in his post, How to Create a Header in a Block WordPress Theme (FSE)? “For a long time header layout was the least customizable part of a WordPress theme, but with the full-site editing (FSE) (that’s changed.” he wrote.

Don’t want to miss the next Weekend Edition?

We hate spam, too and won’t give your email address to anyone except Mailchimp to send out our Weekend Edition