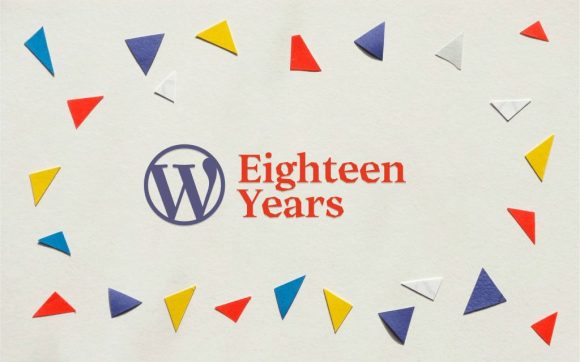 Today marks eighteen years since the very first release of WordPress. I consider myself so lucky to have co-founded the project alongside Mike Little. Who could have imagined that our nights and weekends hacking on blogging software, a fork of b2/cafelog, could turn into something powering over 40% of the web? Or that nearly twenty years in, it would be getting better faster than it ever has been?

I blogged these anniversaries when WordPress was five, ten, fifteen, and last year at seventeen, but as the project reaches an age that, if it were a child, it would be heading off to college, I’m uncharacteristically at a loss for words.

The overwhelming feeling is one of gratitude, so I want to say thank you to every person who has ever been involved with making WordPress as a contributor, a community organizer, or as an end-user of the software. It’s amazing what we can accomplish when we work together.